Save the dates for our spring 2020 program!

The best of Hinsdale Chorale over the years featuring a new commissioned work by renowned composer Shawn Okpebholo!

The Hinsdale Chorale has come a long way since its founding in January of 1999.  It was then that a group of musical friends met to lay the groundwork for a new choral organization.  These musical friends were mostly members of Redeemer Lutheran Church of Hinsdale (including Dr. C. Ronald Lindberg, who still sings with the chorale).  According to Dr. Lindberg, they formed a board of directors, selected the name of the Hinsdale Choral Club, and appointed Jean Spyksma as their first conductor.  The group then recruited singers from local churches and other music organizations for its first season.

Fast forward twenty years, and the group has changed its name to the “Hinsdale Chorale.” Now the members of the chorale hail from many of the western suburbs, and in the past several years, the chorale has upped its game.  Dr. Lindberg commented, “It has been quite a journey seeing the Hinsdale Chorale develop over the last 20 years.  We have had our ups and downs, but I think we have grown and matured into an excellent ensemble.” Similarly, Alberta Mytys, who has also been singing with the chorale from the very beginning, commented that “the chorale has evolved from a decent volunteer community chorus, to a highly skilled, disciplined, and accomplished vocal ensemble.”  In addition to its bi-annual concerts, the group enjoys singing within the Hinsdale community, and every year the group participates in the annual Hinsdale Holiday Walk by performing Christmas carols in the lobby of Hinsdale Bank.

Part of Hinsdale Chorale’s recent success can be attributed to its decision to hire a new music director.  After having had a number of directors over the years, in 2018 the group appointed Dr. Mary Hopper as its artistic director.  Dr. Hopper is a widely respected choral conductor and is Professor of Choral Music and Director of Performance Studies at Wheaton College, where she also conducts the Wheaton College Men’s Glee Club and the Women’s Chorale.  Regarding her direction of Hinsdale Chorale, Dr. Lindberg commented that Dr. Hopper “is a delight to work with and has brought us to a higher level of musicianship.”

Their fall program, which this year was titled “Home for the Holidays,” featured music about the importance of home with some added holiday flair.  The spring program theme, “Memories,” will feature “the best of Hinsdale Chorale over the years.”  Also, to celebrate its 20th anniversary, the chorale has commissioned something really special for this concert—a new choral composition by Dr. Shawn Okpebholo, who is on the faculty at the Wheaton College Conservatory of Music and is a widely sought-after and award-winning composer.  His music has been performed on five continents and in nearly every major U. S. city. Hinsdale Chorale will perform the world premiere of Dr. Okpebholo’s new composition “Voices Rising”.

Being part of the Chorale has been a rewarding experience for many of its members.  Tom Coleman, another of the founding members who is still singing with the chorale, commented that “it has been a joy and privilege for 20 years to help make beautiful music with others who also love to sing.  I generally enjoy rehearsals as much as concerts.”   Kathy Christian, who has been the chorale’s accompanist from very early on, perhaps expresses here what the chorale means to all of its members: “Being involved in choral music is a fantastic way to make a deep connection with others.  To share music and the emotional connection with our fellow human beings is a little bit magical, and it’s always something very special.”

Hinsdale Chorale presented its 2019 holiday program on Saturday, November 30th (at 7:00 p.m.) and Sunday, December 1st (at 3:00 p.m.).  The chorale will present its spring program on April 25 & 26, 2020. Both concerts will be performed at Emmanuel Episcopal Church located at 203 South Kensington Avenue in LaGrange. Tickets can be purchased at the door or online through Hinsdale Chorale’s website (https://hinsdalechorale.org). 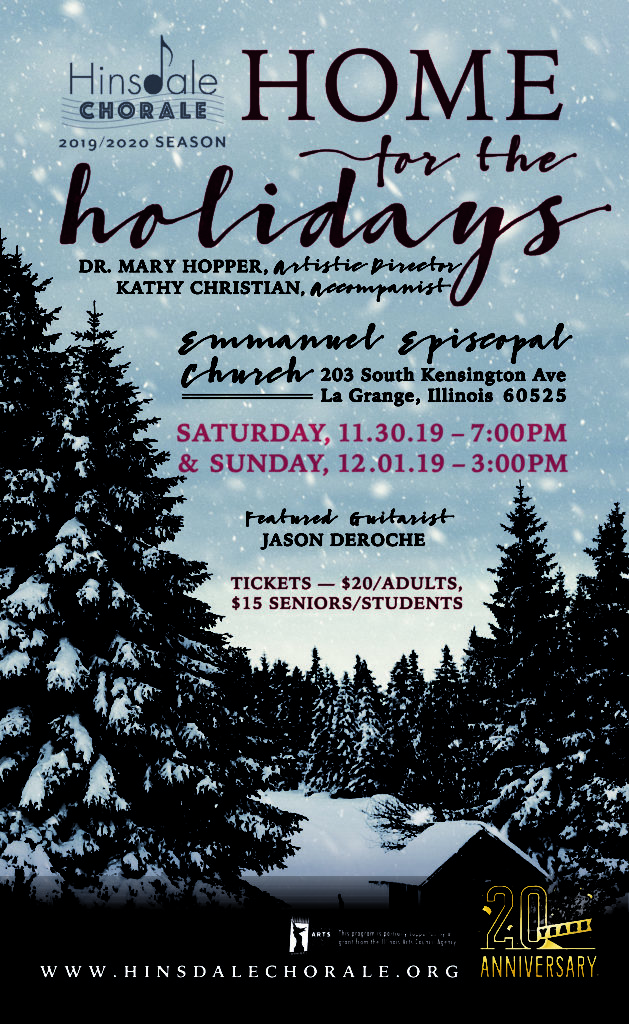 Hinsdale Chorale is a non-profit and educational organization comprised of dedicated professional and amateur singers led by a professional director. The group performs formally twice each year as well as several special appearances for the Hinsdale community. The Holiday show has traditionally been the most extensive performance, often highlighted  by orchestral accompaniment of solo and choral selections and often including an audience sing-along. The second formal show takes place in the spring and has provided the opportunity for us to extend the range of music selections. The group also often supports the Memorial Day services at Memorial Hall with patriotic selections and participates in Hinsdale’s annual Christmas Walk featuring holiday favorites.

Come and help Hinsdale Chorale celebrate the start of our 20th anniversary season with our “Home for the Holidays” winter program featuring guitarist Jason Deroche!
Tickets are available for purchase now!

As one of the most exciting guitarists of his generation, Jason Deroche fuses an Old World tradition with an understanding of the pop culture that exists today. Playing anything from Bach to Beatles, Deroche leaves his audiences delighted with his relaxed performance style and candid sense of humor. The diversity of his abilities has led to some unique and broad collaborations. Deroche has shared the studio and stage with artists ranging from members of 80’s supergroups Survivor and Toto to some of Chicago’s finest classical musicians. Past seasons have included appearances as a soloist with the Cherokee Symphony, the Mount Prospect Community Band, and the Oberon Chamber Orchestra. Deroche has recently been concertizing with the Chicago based harpist Mark Brewer. Their recent CD, “Bach to Brazil”- Music for Guitar and Harp has been played on fine arts stations nationally and abroad, including NPR and Chicago’s WFMT. Through an obvious self-discipline in all musical matters, the self-taught Deroche has developed an unmatched level of virtuosity and artistry.

Deroche is highly sought after as an instructor of the guitar. Students of all ages and abilities enjoy his unique insight and relevant instruction that could only come from a life-long intimacy with the guitar.

Deroche resides in LaGrange, Illinois with his wife Sherri and daughters Peri and Clara. He and his wife play in a guitar & violin duo called Ten Strings. His non-musical interests include cooking, books, and films.

Thanks to all of our supporters for coming to our spring concerts!

If you missed the shows or want to enjoy again, check out some video samples now!

Hope to see you there!

Thanks so Much for Attending Our Winter Program! 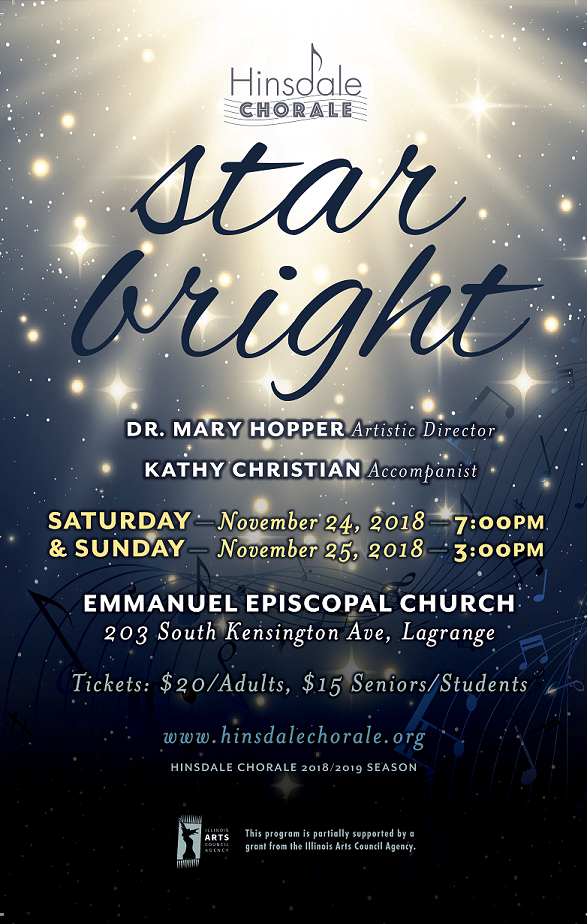 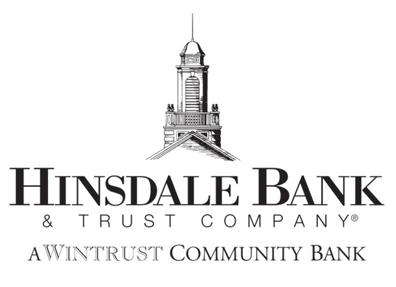 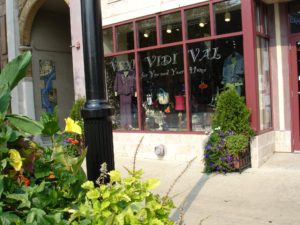 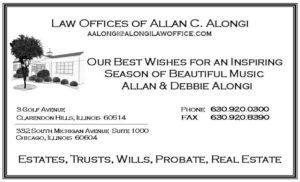